Drones to the Rescue

Drones have become a familiar tool within the real estate community, with more and more creative uses popping up every day. From roots based in film and television, aerial imaging has expanded rapidly to aid people every day in activities such as construction monitoring, project documentation, inspections in hard to reach areas, photogrammetry, site mapping, unique visual imagery to support land planning and design, and marketing campaigns. 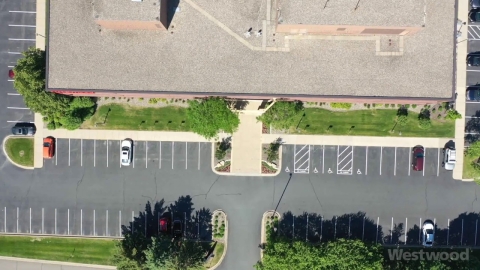 As the proposed Spire Credit Union project located in Vadnais Heights, Minnesota kicked off, the field team decided to take a high resolution drone photo as part of the survey as a historical record of the existing site as well as to test our drone capabilities.

Spire leadership needed to complete an ALTA survey with private utility locates for full project documentation and approval. The request came in late November and immediately after the utility locates were completed, an arctic snowstorm arrived and blanketed the site in snow and high winds. As our survey team was challenged to capture all of the site data, the various painted lines on the ground grew harder and harder to find and make sense of where they were leading to and from.

As the survey background and line work was processed in the office, we realized that gaps in the actual survey data were significant. Upon pulling in the original aerial image to help supplement and confirm where the private electric, gas, and communication lines ran throughout the site, we quickly learned that the resolution of the image was detailed enough to place it under the AutoCAD lines and simply connect the dots to verify locations. Without the aid of the aerial imagery, we would have had to remobilize to the site, resulting in lost time and increased fees.

Whether it’s for new development, reconstruction, or existing building and site improvements, let Westwood help visually document your next project – after all, a picture is worth a thousand words!

When dealing with an ALTA/NSPS Land Title Survey, there is no such thing as an “update,” there is only a new survey. Brent Peters explains why, from a surveyor's perspective. Get an ALTA survey before your next real estate investment to properly manage and mitigate risk.

As Westwood’s Director of Land Survey Service, Nate Carlson has a large repertoire of experience in all things survey. He keeps up with the latest technologies and enjoys solving problems for clients, but what does he enjoy doing in his free time?